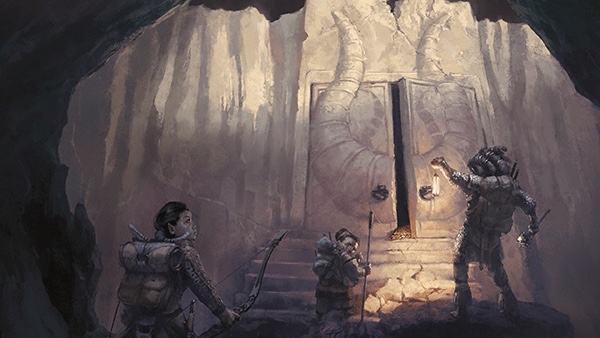 The Fight at the End of the Hall

This story is part of a larger series based on the published adventure “Waterdeep: Dungeon of the Mad Mage”. There will be spoilers.

The party continues through dark desolate passages of ancient dirty stone. Black soot and long deep scratches cover these tunnels. They record the history of the dungeon. The party steps over pools of dried blood and broken decomposing bodies. The further them move in, the mustier and warmer it gets. Drips of water can be heard somewhere in the darkness. Roakala leads the party with the dim glow of her new blade guiding her. She eyes for danger with each cautious step she makes. She steps on a piece of discarded bone, it shatters under her wait but she seems to take little notice. Instead, she moves forward until she enters a small room.

Here is where the tunnel ends. A room etched at the end of the hall. A room full of the remains of failed adventurers. Bodies, both whole or in pieces, are scattered in small piles. Those with flesh intact rot away slowly in the darkness. Those who aren’t have long since become bone and are now lost here forever. Roakala pauses for a moment, her eyes trying to make sense of the scene before her but her eyes begin to water from the foul odor that assaults her nostrils. The party moves in carefully, each scanning the room for dangers or valuables. As the party makes its way around the room, carefully trying to stay close to one another, two piles of discarded flesh begin to move. From them sprout large floating flesh creatures with bodies like brains and beaks for mouths. Attached to each are long tentacles that wave wildly below them. They raise with loud deafening screeches.

“What the fuck is that?” Roakala lets out as she moves her sword and shield into position.

Before she can say anymore, the Grell is on top of her. Its skin slimy and full of discolored ridgels. It swipes at her with its long heavy tentacles. The force of the impact knocks the breath out of her. The tentacles wrap around her tightly and begin to carry her off. She coughs and gasps as she struggles to breath. The monster pulls her to its mouth and takes a nip at her with its sharp beak. She screams in agony as the beak tears into her flesh, ripping through her robe. Warm blood begins to seep down her shoulder. The monster turns and begins to take her away.

Roakala takes a step to help her the young dragonborn, but her path is blocked by the other Grell whose tentacles flare angrily and its beak snarls violently. Tentacles snap towards the Orc like whips, but Roakala’s instincts kick in as she doges and blocks the incoming flurry. She quickly closes the gap between her and the Grell who now faces her. Its eyeless face turns to her and takes a large nip at her side but instead of the soft Orcish flesh it excepted, its mouth bangs against the cold metal face of her shied. The force of the impact shakes Roakala to her core. It forces her to step back as her arm shakes under the weight of the monster’s attack but she stands strong. Sweat begins to form on her brow as she attempts to create an opening for her blade.

Diljaris begins to regain her breath as the shock from the blow begins to wear off. She begins to catch her breath. The grip on her body tightens as the slimy grey tentacles squeeze at her side. With the little breath she is able to mumble in an ancient tongue. Her eyes begin to glow blue. Her fingers spark with a bright blue flame. Where her burning hands she shimmies to touch the beast. Its skin begins to sizzle under the heat of the magical flame. A sudden burst of blue fire leaps from her hands, singing the creature. It screeches in pain and drops her to the ground. Diljaris lands in a loud and painful thug, once again knocking the breath from her lands. With the little strength she is able to muster, she stands up slowly. She takes wobbled labored steps away from the beast as the smoke and scent of burning flesh surrounds her.

Drugnar watches the dragonborn get swooped up and dragged away, he takes a step before the monster is able to make it far. He watches as the dragon born drops to the ground and struggles to make her escape. He moves as his legs can take him. Each step landing with heavy metaled determination. His right hand reaches for the pendant around his neck. Another gold coin hidden under his armor. This one houses the image of a beautiful woman carefully carved on its face. Drugnar moves himself between the monster and Diljaris and reaches out to touch his wounded ally.

“Sune lend me your light. Protect this creature as your own. Give her the strength to move forward. To continue to see the beauty of this world.”

There is a moment of silence as the two continue to move slowly. Suddenly, the coin in his hand begins to glow softly. The light spills through the cracks between his fingers. His left hand begins to glow warmly over Diljaris’s blue scales. Her steps begin to quicken as she appears to have newfound strength to move her forward. She no longer clutches at ther ribs, but moves quickly to make distance between her and the Grell. “Thanks” she expresses the two move away from the assailant.

An arrow flies by them from the darkness. It wisps by Drugnar’s head and connects with the floating monstrosity. Gorak stands at the other end, loading a second arrow onto his bow. He squints into the darkness, takes a breath and fires. The second arrow whiles through the air, piercing into the cold grey flesh. Drops of blood spray out, splashing against the filthy dungeon floor. A small river of blood starts to make its way down the shaft of the arrow. The Grell begins a hastened retreat. Blood drips bellow it, creating a trail in it’s wake.

On the other side, the second Grell is still locked in combat with Roakala. It snarls and flails against the orcs shield. The Grell makes quick swipes against the orc who has no choice but to move back and look for an opening. The Grell continues to make careless attacks, landing in loud cold slaps against the floor of the dungeon. Roakala dodges them, using the momentum of her movement to quickly close the gap between her and the monster. Before the Grell has a chance to react, Roakala is near the beast. She takes a strong confident swipe at the monster. The blade slices through the skin, leaving behind a deep gushing would and pain. In its desperation, the Grell takes swipe at the orc, but Roakala proves too fast. Instincts kick in and the blade comes down against the assailing tentacle. The blade swipes through easily. It’s soft glow momentarily obscured by the blood that slowly drips down its face. A large half of tentacle drops on the floor besides her. It flails uselessly without it’s body until finally, the last bit of life it held fades away into the darkness surrounding it. The Grell turns to run. It begins to float away in fear leaving itself open to Roakala’s third attack. The blade swipes quickly towards the retreating beast, slicing into unsuspecting flesh. It screeches in undeniable agony as it hastens it’s retreat.

Diljaris now stands more confidently, although her hands still shake. She closes her eyes, takes a long calming breath as she begins to recite the ancient words that fill the pages of her book. Her tail wages in a circle, her hands flail above her head. Her eyes glow blue as flames erupt from her hands. She goes silent as her eyes glare down the retreating monsters. ‘With this flame, I purge you from this world”. The flames launch from her hands, landing and creating a large explosion that engulfs the two Grell. The room fills with blinding light. When the fire fades and the room dim, the two Grell are left blackened and still burning. They float away weakly, their tentacles no longer flailing but instead left singed and curled against their scared bodies.

Drugnar takes advantage of the situation. With holy coin in hand he begins to say “Sune, mistress of beauty, show these beasts your light!” A flash of light chases down the farthest Grell. Instinct kicks in and the Grell moves out of the way. The soft glow of the spell reveals the battered beast and its desperation. It crashes against the wall. Small bits of it crumble to the floor as the Grell passes by, still in its attempt to escape. An arrow whiles into its back. This time instinct fails the creature. The arrow digs itself deep into the Grell’s body. Large spouts of blood poor from it. It falls from the air and squirms as it’s last ounce of life escapes it.

Gorak turns his head to the last remaining Grell who continues to burn and move through the darkness. His eyes squint as he takes careful aim. The arrow finds its place in burnt flesh. Agony and terror echo inside the last desperate squeals of the retreating Grell. In its desperation, it never noticed Roakala closing the distance until her cold glowing blade sunk deep into its flesh. Blood pours out of the wound and washes over Roakala’s hands as she uses all her strength to continue to cut the beast. The Grell grows heavy on her blade as blood as entrails begin to spill from the new wound. She takes the blade out, the blood drips over the runes making them illegable. The Grell drops heavily on the ground, lifeless.

The party stands in silence, still weary of danger, still searching for hostiles.