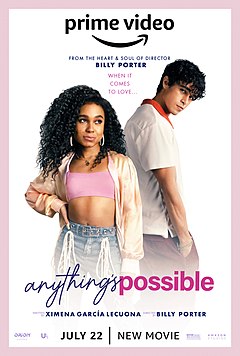 I thought this movie was fine, but it isn’t something I would watch again. There is an audience for this movie, and I am not it. If you are the target demo, you will have a  deeper appreciation for this movie. If you aren’t in the demo, the story and acting is fine enough where you won’t hate it.

Anything’s Possible is about a trans girl Kalsea and her relationship with a sis boy Khal. While the movie does touch on some trans issues, the movie focuses on their blossoming relationship as they try to survive high school. This is another teen movie at its core, but one that fairs a little better than the rest.

This is a teen movie that suffers from a lot of the same problems that exist within this genre. The narrative exists in a bubble. As a result, there are no real stakes.  The issues Kalesa deals with are resolvable, although the movie will create drama to move the plot forward. You know everything will work out at the end, but I didn’t mind it much this time because the story and the characters are interesting enough. I loved the chemistry between each character and loved the fact that this movie doesn’t try too hard to make characters hip and cool.

As far as tween movies go, this one fairs a bit better. I enjoyed that the relationship builds at a more natural rate, although there is still some ex-machina involved. It makes sense why they are together and I wanted them to be together. I liked that they don’t make her a symbol for trans kids. She wants to just be treated normal and doesn’t want the fact that she is trans be the only important part of her identity. It is hard being part of a disenfranchised group because there is the unfair expectation and pressure to be the spokesperson for the group. I liked that this is addressed, although she does ultimately become the spokesperson at the end. Tween movies aren’t known for having the soundest logic.

I also liked how it wove the different narratives together. You get both the lead’s perspectives as they try to figure out who they want to be while facing the pressures of society that try to mold them. It was very well edited and it all felt like one cohesive story. The way they blend streaming, texting, and social media is very well done. It doesn’t feel fragmented or like a cheap attempt to pad the time, but rather adds to the narrative in a meaningful way. I love how story telling is evolving with technology and they are starting to get it right.

If you are the target audience, it’s a cute teen movie with a trans lead that doesn’t get too preechy. We need more positive trans leads and this is a step in the right direction. For eveyrone else, I wouldn’t go out of my way to watch it, you won’t hate it if you have to sit through this.

While I wouldn’t go out of my way to watch this movie, it’s not a bad one. You can stream it on Amazon if you have a Prime membership.