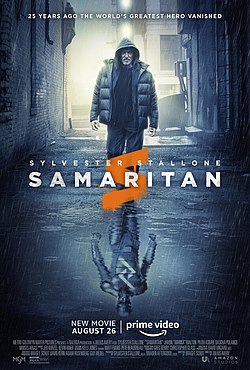 Samaritan is Silvester Stallone’s attempt at the superhero genre, and I have to say, it is pretty good. Sure the pacing was a little slow, but his unorthodox take on the genre was both refreshing and entertaining. I doubt it will win any awards, but if you have been curious about the movie, go ahead and watch it.

Samaritan follows a young troubled youth Sam who is obsessed with the superhero Samaritan. Samaritan once protected the city from crime and against the supervillain Nemesis, but an epic encounter between the two leads to their disappearance. Most people believe the superhumans to be dead, but Sam holds out hope that Samaritan is alive and will one day make his return. His beliefs seem to hold some truth when he encounters a mysterious man who he believes to be Samaritan. At the same time, an ambitious and delusional crime boss attempts to fill the hole Nemesis left behind. Using the supervillain’s magic hammer, he plans to take over the city and bring forth a new world order. With the city spun into chaos, will Samaritan once again rise and bring the city new hope? You will have to watch the movie to find out.

This movie certainly gave me some Unbreakable vibes because of how it treats superheroes. It certainly challenges their traditional role in society by asking whether or not their existence is necessary. Samaritan makes some interesting points and raises some interesting questions about the genre, but unfortunately, I can’t address them without spoiling the movie. Just know that this isn’t your traditional superhero narrative, and it is going to feel a little slow. It does have a pretty satisfying conclusion if you stick with it.

This is a solid movie with fantastic actors, an entertaining narrative, and some pretty cool action. I always enjoy watching superhero movies that aren’t bound by their source material because they have a certain level of freedom that the mainstream ones don’t. They aren’t bound by the same conventions and aren’t bogged down by repeating a familiar backstory. I am even more impressed at how deeply Stallone understands the action genre and his respect for his ability to consistently make fun action movies. Samaritan is a fantastic combination of both these worlds and one that I can in good conscious recommend.

If you want to watch a decent superhero movie, you should give this movie a chance. You can stream it now on Amazon.