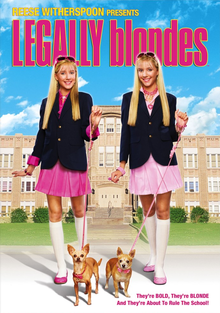 I did not hate this movie as much as I thought I would. Usually, when it comes to sequels, a series loses its magic around the third entry. This is especially true when there is a change in the casting, like there is in this movie. By the third movie, a series becomes a shameless and poorly executed cash grab. I’m looking at you Big Momma’s House 3. I didn’t feel that way about this movie however. While this movie isn’t perfect, it is competently made, and not a bad way to spend two hours. I wouldn’t go out of my way to watch it, but you won’t hate that you did.

This movie focuses on Elle’s twin cousins who move from England to attend a prestigious private high school in Malibu. The local mean girl has taken it upon herself to get rid of the twins in order to hold her reign over the school. This movie is very tweeny, so keep that in mind if you are considering this movie. A lot of this plot is a regurgitation of the original, but translated to a modern high school setting. It hits a lot of the important story beats from the original, but with a much less serious tone. It is really well done for what it is, but it makes it also means that this movie isn’t for everyone. If you are in the target demographic, you might have a lot more fun with this movie.

Obviously this movie won’t win any awards, but that doesn’t mean it is terrible. For the most part, the translation was properly done. The protagonists were fine, the acting was decent, and the villain was cartoonish but fun. The fact that this was set as a high school drama is limiting for the story, but it is entertaining enough. There are some cringey and sappy elements to this movie, but it fits the tone of the movie.  While it doesn’t capture the magic that Legally Blonde had, it is a nice attempt.

This movie is fine for a third, but it is made for a certain audience. If you have to watch this with your kids, you won’t hate it. You can watch it for free on YouTube. Trust me, you can do a lot worse for free.