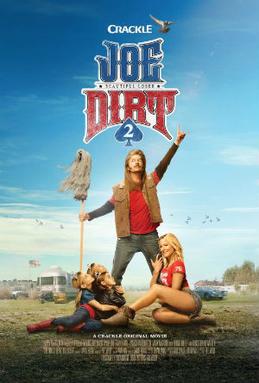 Joe Dirt 2 is the sequel no one asked for. It isn’t a direct sequel but rather a painfully unfunny and lazy parody of iconic movies starring Joe Dirt. Someone who I assume was on a lot of drugs thought it would be a fantastic idea to remake iconic movies with a character who wasn’t very funny to begin with. I remember liking the first movie, but I was the target audience at the time. I refuse to watch the movie now because deep down I know that it hasn’t aged well. After seeing this disaster of a sequel, I will let it live in my heart as the experience it was and not soil it with the experience it actually is.
The acting in this movie is terrible. It feels like people just showed up for their paycheck as no one tries remotely to be funny. This might be a symptom of this movie’s terrible script. There aren’t any funny jokes in this movie, just a series of unfunny skits loosely tied together by a framed narrative. This movie is a dream within two framed narratives where Joe learns that he was special the whole time. To illustrate what type of movie this is, there is a five-minute scene where people stand around and fart on Joe Dirt. The rest of the movie is no better as you have to sit through skits that go for way too long hoping the credits will roll to end your misery.
You can find this movie free on YouTube, but don’t bother. It isn’t funny and it isn’t worth your time. This sequel is anything but beautiful.